Part of working at Stack Overflow means refreshing a desktop or laptop build every 2 years.  For the better part of the last year, I've been waiting on my refresh, and proclaiming the good word about the upcoming Macbook Pro 2016 refresh. Sadly, MBP 2016 refresh is generally underwhelming.  As a result, I went with a Razer Blade 2016 with  Razer Core docking station. 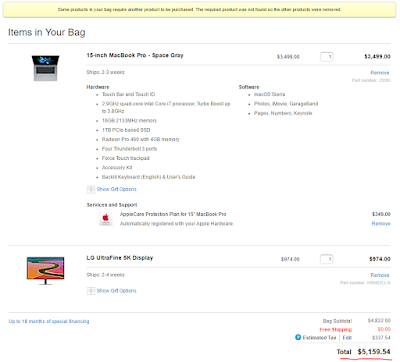 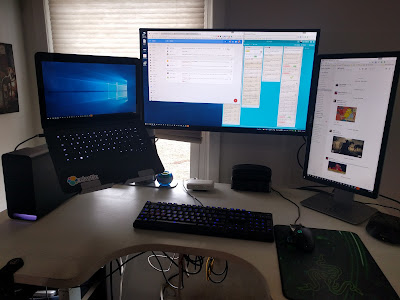 Only 2 leads connect to the laptop - USB C on the Right, and the laptop charger on the left. 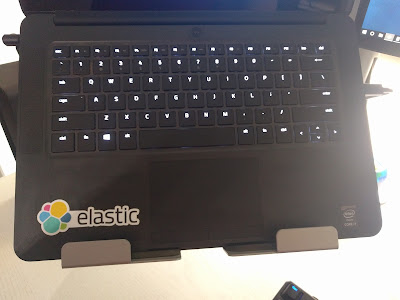 To keep my host OS as agnostic as possible, a majority of my work day is compartmentalized into VM's.  Any kind of web development is done in my Ubuntu VM.  OSX Development for Simian / Caulflower Vest is done in either my OSX Development VM, or an OSX Testing VM (Simultaneous running of these VM's has been the greatest strain on the 16GB of system ram.  Bumping my paging file to 32gig seems to have resolved most issues).  I offloaded my domain joined Windows VM to a Vmware View Pool running on a remote ESXI cluster (Although this could have easily run locally as well.)

All local VM's are backed up daily to my Synology, and the Synology copies that volume to AWS.

With very little customization to the laptop OS (aside from aesthetics / workflow tools like Divvy and Pussh) I can easily remain host agnostic.  In researching this build I discovered that the Intel NUC is compatible with the Razer Core.  The NUC could easily replace my laptop in the event of physical damage or repair.
Disappointments:

Windows
Windows 10, while a huge improvement over 7, still has significant use issues.  Working with multiple monitors with varying DPI is a nightmare.  Moving a window from screen to screen results in a stutter.  At high DPI, windows 10 is not pretty.  (Where native windows fails, a multi-monitor ubuntu VM works just fine)

Ram
Going with the Razer meant the same ram limitations as the MBP at 16GB.  While this was a major factor in pushing me away from the Macbook Pro, I reasoned that I could get by with less demanding Linux VM's, than running Windows in a VM on OSX.

The Bezel
Razor hardware is nice overall, but the bezel is just hideous.  I'm not someone who would have thought I'd care greatly about bezel size.  The bezel on the Razer is over 1" in place.

Portable
With the pull of 2 cords, I can take my gaming and development systems anywhere.  The Razer has an onboard GTX1060, which is GREAT for most games.  Using Duet I can turn my ipad into a second screen, or use my AOC 16" monitor.

Powerfull
Part for part, the Razer 2016 has better graphics, Ram and CPU compared to the Macbook.  Not much to say on this, other than I'm getting much more machine for less.

In conclusion - Never again Apple.  I was so ingrained in the Apple ecosystem that I nearly forgot what it was like to freely choose the hardware and software I wanted.  Some things are done very well by Apple  - OSX is a beautiful OS that looks great even in my VMs.  It's disappointing that a few marginal hardware improvements (32 gig of Ram, a reasonable battery, working with NVidia to put a substantial card in their system...) could have kept the MBP as my primary device; I am happy to be reminded by this "Brave" move that Apple does not care about Gamers, or developers with strong opinions about hardware.